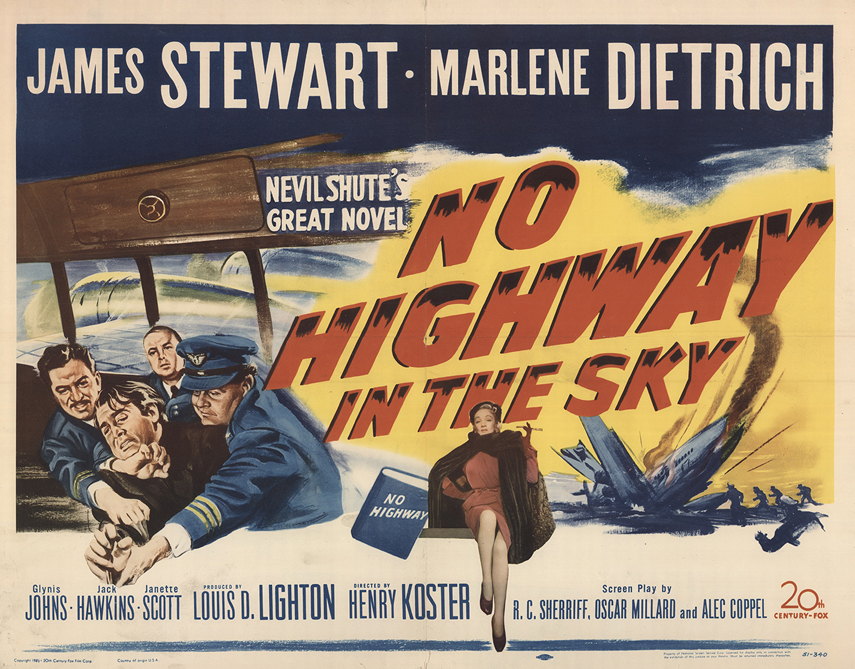 Yesterday, while I waited for the rain to stop, I caught a favorite old movie on Fox Movie Channel. The TV guide in the newspaper doesn’t carry a listing for FMC (why is that?) so that many of the films I watch there are already in progress when I tune in. But I digress.

The movie was No Highway in the Sky with James Stewart, Marlene Dietrich and Glynis Johns. It came out in 1951 and I saw it then in the theater and several times since on television. This story was shot in the wonderful years of film making when airplane seats were as large as recliners and passengers got involved in each other’s lives. Also, during this period, actors did not feign accents. This story took place in England and James Stewart played an aeronautical engineer whose theory predicted this particular model of airplane would have its tail fall off after a specified number of air miles. Glynis Johns was the stewardess and Marlene Dietrich a famous movie actress and a passenger on the flight.  Though I am assuming all were supposed to be English, Stewart drawled and stuttered in his usual style and Ms. Dietrich responded in her German accent.

This suspending of disbelief happened often in the movies back then. The thriller Gaslight takes place in London, yet the stars all spoke in their native accents: Ingrid Bergman (Swedish), Charles Boyer (French), and Angela Lansbury (English).  Joseph Cotton (American) played the head of Scotland Yard.  (It is said that during the making of this film Ingrid Bergman spoke so little English that she learned her lines phonetically and often wasn’t sure what she was saying.)

Back to No Highway in the Sky. The reviews said one would enjoy it much more if one read the book first. So I investigated to find that the novel No Highway was written by Nevil Shute in 1948. He wrote many novels during the middle of the Twentieth Century.  His best known work was On the Beach, written in 1948 about nuclear war and the end of the world.  This book was made into a movie with Gregory Peck and Ava Gardner. Mr. Shute was never happy with the director’s (Stanley Kramer) interpretation of the relationship between the two main characters. (Gregory Peck agreed with the writer.) In the book, the two fall in love but do not consumate their relationship because of Peck’s feelings of loyalty to his dead wife. Mr. Kramer decided the audience would never believe that two people could resist the pull of sexual attraction for a higher feeling of loyalty. Too bad Stanley Kramer had so little faith in our ability to suspend our disbelief.

«« A Mile in Their Shoes

A Bowl of Cherries, A Box of Chocolate and Tetris »»