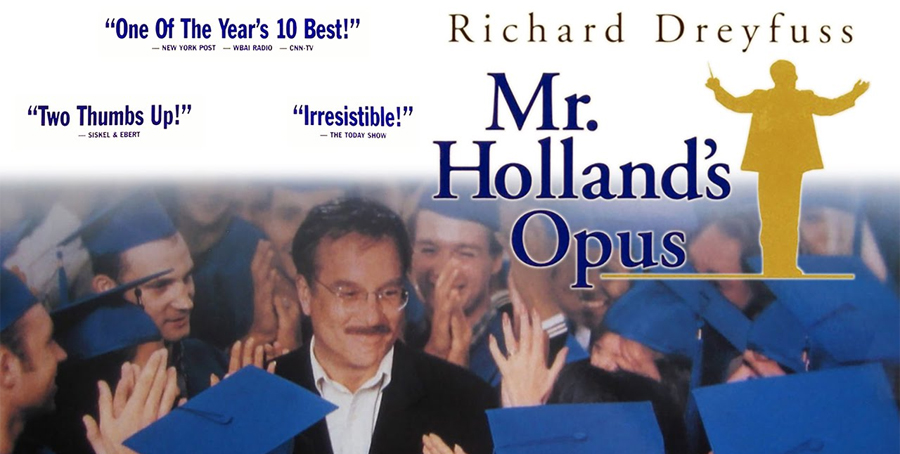 While channel-surfing (do they still call it that?) yesterday, I landed on a favorite movie, Mr. Holland’s Opus, starring Richard Dreyfuss.

Glenn Holland is a musician, primarily a composer, who decides to take a position as a music teacher in a local high school.  The plan is to teach for a few years, save his money and compose in his free time.  Anyone who’s been a teacher knows there not that much money to save and there’s no free time. In fact, he realizes almost immediately, “it’s a harder gig than I thought.”

A baby comes along – not part of the plan, but okay. Then it happens that the child, Cole, is deaf. Not only does this suck up any extra money but Glenn feels like he is unable to communicate with his child, can’t share with him the thing he loves most, music.

Ultimately, Mr. Holland spends 30 years at that high school and becomes a real teacher, finding enjoyment and reward working with  young musicians.  He and Cole learn to understand and appreciate each other.  A sweet story.

The first movie I saw Richard Dreyfuss in was Goodbye Girl with Marcia Mason. (He played a musician)  I also loved him in The Education of Max Bickford, a television series in 2002 where he played a history professor in a small college.  It lasted 22 episodes – that’s not quite an entire season, I’m thinking – and a pox on the TV executive who canceled this excellent show.