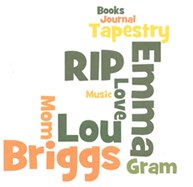 A play is not complete until it’s been performed on stage. It takes actors, director, sets and props to make the script come to life. Having the opportunity to watch this process (with my very own play!) was an amazing experience.

The play, R.I.P. Emma Lou Briggs, is about Emma Lou Briggs’ three daughters who come together the day after their mother’s funeral to decide what to do with her things.  They have different ideas about what needs to happen and the results are family dynamics that often come to the fore at such times.

Our director, Lana Hallmark, chose the cast carefully, finding three women who not only looked like they could be sisters, but also had some ‘sister-like’ chemistry. Diane, full of sentiment about her mother’s belongings was played by Carolyn McNamee. Shelly White played Karen, the socialite in a hurry to get things taken care of and Suzanne Guyman was cast as JoEllen, the youngest sister whose biggest concern is that everyone should agree … and be agreeable.  They were ably supported by Madison Kuebler as Nikki, Diane’s daughter and J.R. Thomas as Hal, Karen’s husband.

The cast gathered early in June for the initial read-through.  Then they talked about the plot, often in the light of their own similar experiences.  This happened more than once either before or following a rehearsal as they explored their characters and how they might feel and react.

I had written Hal, the brother-in-law,  as a rather bland person, I think. I needed an antagonist that wasn’t a sister and I put him in to heckle a little. It was fun to watch Lana, the director, and J.R., the actor, define Hal’s character.

As sets took shape and we began to gather props, Lana decided the sets and props should be only those necessary (or mentioned) in the dialog. I had described Emma Lou’s living room as a house where someone had lived alone for several years: too much furniture, knick-knacks everywhere, full bookcases, old hi-fi, etc.  Lana felt the setting should be simple because the play was character-driven. I didn’t argue a bit, complimented that she saw my characters as strong enough to carry the show.

This was just one instance of the script being better than I imagined when I wrote it, due to the director and actors.  The ‘nurturing nudges’ to help the cast get inside the characters came from excellent direction. Then the actors just went onstage and became Emma Lou Briggs’ family.

I watched every single performance, hardly believing what I saw.  It was awesome

«« Same kind of different as me