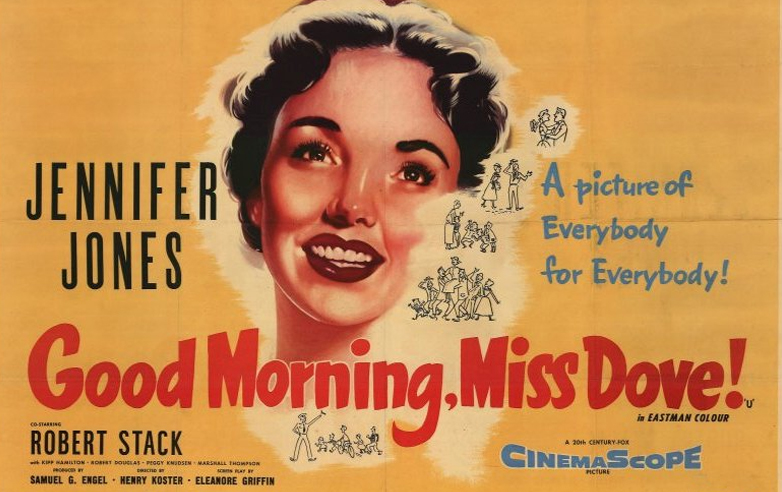 On Labor Day Weekend, probably in recognition of the beginning of a new school year, Fox Movie Channel showed one of my favorite movies, Good Morning, Miss Dove, starring Jennifer Jones. This is the story of a prim and proper geography teacher in a small town, who is suddenly hospitalized with a serious condition. While awaiting surgery, she thinks back over her life and how she came to be a teacher. (The only thing she was qualified for when her father’s death left her in debt and without an income.) The positive influence she had on not just her students but on the entire community is shown in flashbacks of this poignant story about a dedicated teacher. Her former students are played by Robert Stack, Chuck Conners, Jerry Paris and others.

The book, written by Frances Gray Patton, was published in 1954.  I read it about that time in an issue of Readers Digest Condensed Books. Ms. Patton was a short story writer whose work appeared in New Yorker, Colliers, Harpers, McCalls –– all the popular magazines that regularly included short stories in their issues.  Good Morning, Miss Dove was an extension of a short story that first appeared in The Ladies Home Journal. Though Ms. Patton was a successful short story writer, Miss Dove was her only successful book.  She died in 2000 at the age of 94.

«« From the Writer’s Notebook