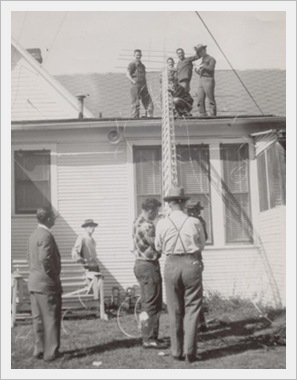 Every happening in life, be it defeat or victory, a challenge or a walk in the park, reaches a whole new dynamic when other people get involved. This is the blessing/curse of growing up in a large family, and the benefit of having a host of friends. Thus the party atmosphere the day we installed an antenna on the roof of our house in Denison, Texas in the spring of 1951.

The house we bought during the post war housing shortage was somewhat small for our family of eight to occupy. Originally it had only two bedrooms and one bath. As soon as feasible, Dad remodeled it to accommodate a master bedroom, boys’ dorm and girls’ dorm. We were lots of people living in a diminutive house, but that didn’t stop friends of all ages from dropping by regularly to see if anything fun was going on.

One weekend, my dad brought home a used 13-inch television set. If we liked it and if it got good reception, he told my mother, it would soon pay for itself with money saved from movie tickets and popcorn.

We placed the television set in a central spot in the living room and turned it on. Snow. Dad adjusted the contrast and fiddled with the vertical and horizontal hold buttons. Was the shadow that moved across the screen a person? A horse? Or ghosts?

Much of the problem was that we lived in a town near the Red River, half way between Dallas and Oklahoma City. The FCC, in its wisdom, had licensed stations in each city to broadcast on Channel 4. Often the feed from WKY-TV in Oklahoma City would interfere with reception from KRLD-TV in Dallas.

“The signal is too weak,” Dad declared. “We need an antenna.”

The next Saturday a delivery man deposited a large metal contraption, along with an array of poles and wires, in our back yard. The plan was to install a 25-foot latticed tower on top of the roof and run a lead-in wire down the rod and through the window to the back of the television set. Guy-wires attached to the apparatus would hold it steady. The antenna should allow us to receive a clear, strong picture. Bring on “Mr. Peepers” and Milton Berle!

Brothers, friends, boyfriends, and fiances all gathered to be a part of the activity. Curious neighbors soon joined the crowd. A television set was still a bit of a curiosity in our town. A few homes featured a small antenna fastened to the eaves. The ambitious effort involved in setting a large arrangement of metal rods on the roof would be a sight to see. Females were sent inside to the safety of the house and the he-men set to their task.

Once during the process, the workers on the housetop lost control of the pole and it came crashing down into the middle of the back yard, striking fear into the hearts of stouthearted men on the ground. This was repeated at least once. Finally, before any lives were lost, Dad announced Plan B. The workers stuck the latticed pole into the ground, wired it to the gutter, and secured the antenna. This whole arrangement was only slightly taller than the one attached to the neighbor’s eaves.

Ah, but the task was not complete. The antenna must be oriented to the channel we most wanted to receive. This was accomplished by stationing one of the boys on the edge of the roof to manually turn the antenna. Likewise, persons were posted in the yard, at the back door, and in the living room in front of the television set. Through a series of echoing instructions, the wire structure was finally pointed to bring in the best picture possible – for a receiver seventy miles from the TV station and in the flight pattern of a nearby Air Force Base.

Whether Dad’s promise of the set paying for itself ever happened, I couldn’t say. I suppose the teens and tweens that gathered enjoyed the novelty of the small box that poured forth comedy and drama. But according to general consensus, the most fun had been installing the antenna.

«« The Tony Awards (Six Days Past)

Patting Myself on the Back »»