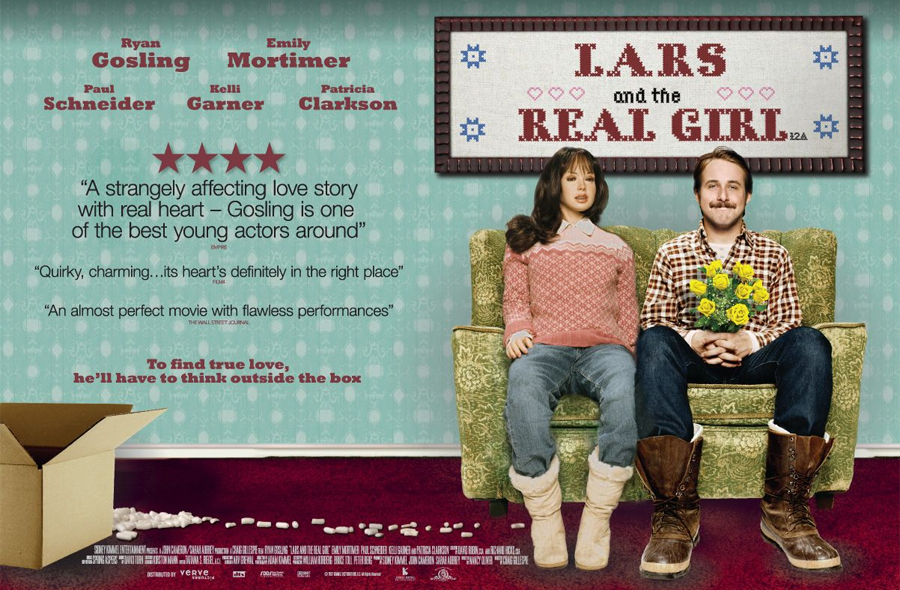 Some of my children and grandchildren are fans of the TV drama “24”. They watch it, tivo it, quote it, and analyze it on their blogs. I knew the premise of this show but had never watched it. I had to see what all the excitement was about. So I used my Netflix arrangement to rent the first season of “24.” Each week for the past month, I have received a dvd with four episodes. Sixteen times during the past 28 days I have watched Jack Bauer struggle to save his wife and daughter from abductors while trying to head off the assassination of a presidential candidate; fighting terrorists – all the time unsure of who he can really trust…  I needed a break from the tension.

Thus it happened that “Lars and the Real Girl” appeared in my mailbox. This movie, made in 2007, stars Ryan Gosling.  The blurb on the dvd sleeve says the movie is a comedy about a delusional young man who orders a life-size doll off the internet and when he falls in love with her his family becomes concerned.

Sounds like a plot that might go way over the top, doesn’t it? With an actor like Jim Carey or Will Ferrell, it could become a gross slapstick about sex dolls. But Ryan Gosling portrays the now-normal-now-skewed Lars with believability.  This is not so much a story of a young man in love with a doll as it is about what happens when people treat another person’s fantasy with acceptance and understanding, allowing Lars to have his delusion because he needs it.

Ryan Gosling was nominated for the Critics Choice Award for his fine work in this film.

«« Dance With the One Who Brung You

Whose Needs are Being Met Here? »»