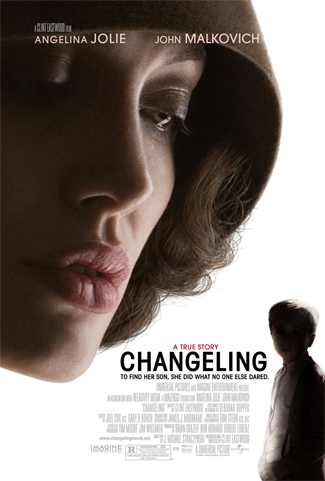 This story of a missing child and his mother’s search for him was inspired by an actual event that took place in Los Angeles during pre-depression days, which makes it even more interesting to me. Angelina Jolie plays Christine Collins, a single mother who comes home from work to find her nine-year-old son missing. She challenges first the indifference and then the dishonesty and corruption of the LAPD Captain (Jeffrey Donavan) when he produces a young boy he insists is her son. She finds an ally in a local Presbyterian pastor, played excellently by John Malkovich.  Though it is unusual to see Malkovich in such a sympathetic role, when he’s usually scaring us to death.

Directed by Clint Eastwood, this movie has a great cast. Young Eddie Alderson turns in a very good performance in a small but intense role. Alderson is my family name, so what can I say, of course the kid’s a good actor.

Angelina Jolie received an Oscar nomination for her portrayal of Christine Collins. This movie is well worth your while.

«« The Power of Positive Laughter

A Visit to a Vast Wasteland »»