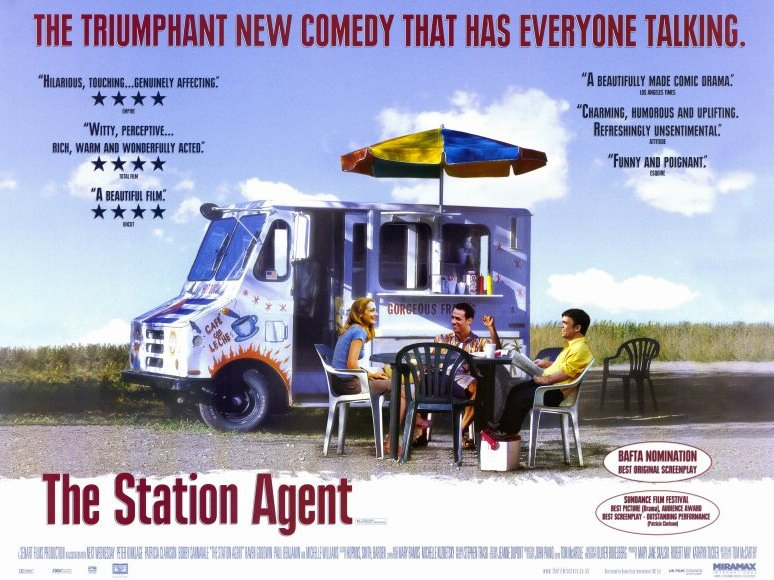 One of the many blessings of an unexpected snow day is having a good movie in the house waiting to be seen.  I watched The Station Agent twice during the two-day snow break, the second time with two twenty-year-old young men who found it as delightful (though they wouldn’t use that word) as I did.

When his only friend dies, a young man born with dwarfism (Peter Dinklage) inherits an abandoned train station in rural New Jersey. Perhaps to escape what his life is (rude jokes, a stranger taking pictures), Finbar McBride decides to go to Newfoundland, NJ, and live in quiet seclusion. But his solitude is soon interrupted by two locals and Fin reluctantly becomes acquainted with an artist, Olivia  (Patricia Clarkson), suffering grief/ depression, and Joe (Bobby Canavale) a talkative, tries-too-hard, Cuban hot-dog vendor.

Fin’s stoicism, Olivia’s I-can-handle-it- no-I-can’t phase of the grief process and Joe’s exuberance that covers underlying tension in his life makes them unlikely candidates for friendship. The story of how their relationship develops is told with tenderness and humor. The tagline for the foreign DVD release was: “Loneliness is much better when you have someone to share it with.”

Peter Dinklage is a fine actor, whose work has been mostly off-Broadway. TV viewers will recognize Patricia Clarkson and Bobby Canavale from their many appearances there.

The Station Agent is rated R for language, but (for me) that did not get in the way of the beautiful story.