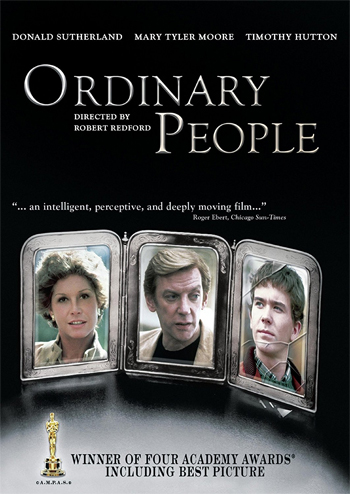 One night recently, during Turner Classic Movies’ 31 Days of the Oscars, I watched (again) Ordinary People a wonderful film from 1980. I was first introduced to this movie about 1995 when I was training as a crisis line volunteer. The social worker conducting the session used excerpts from this story to show examples of post traumatic stress disorder and the young man’s dramatic breakthrough in his counseling.  The few scenes I saw piqued my interest and I rushed out to rent and watch the whole movie. It’s a favorite.

Timothy Hutton plays seventeen year old Conrad Jarrett who survived a tragic accident that killed his brother and he is excellent in this role.  At twenty, this was his first film.  His early experience  was in television – Disney, mostly – but that doesn’t mean he was a novice actor. His scenes are powerful and riveting. He won an Academy Award for Best Actor in a Supporting Role.  (I wonder about this, because he seemed like the lead character to me. But I don’t know how these categories are decided.)

The psychiatrist is played by Judd Hirsch, who at the time this movie was made, was starring in the TV hit “Taxi.” This was quite a departure from his usual roles and earned him a nomination for Best Supporting Actor.

Ordinary People is from a novel by Judith Guest (her first novel) and won an Academy Award for Best Motion Picture and for Robert Redford as Director. Also, Alvin Sargent won the award for Best Writing for adapting the novel into a screen play.  Mary Tyler Moore was nominated for the Best Actor in a Leading Role for her protrayal of the mother. Her performance was outstanding, containing not a bit of the sweet, naive career girl she played on television.

This picture won at the Golden Globes and several other award ceremonies during 1981. But how much more acclaim can a drama about mental illness earn than for someone in the profession to say, “Yes. This is how it is. They’ve got it exactly right.”

«« You’re Only As Old As You Feel (and other cliches)