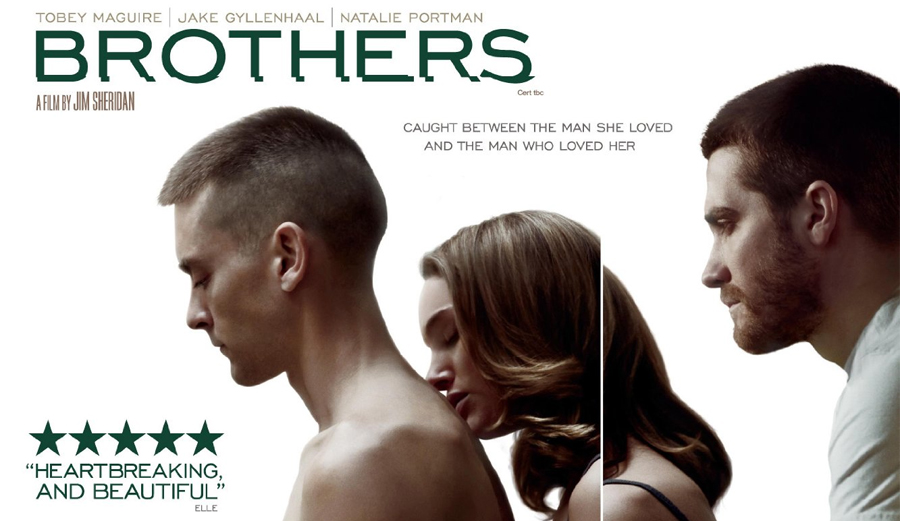 There are some movies I will watch over and over.  To Kill a Mockingbird comes to mind.  Others (Crash, One Flew Over the Cuckoos Nest) get only one viewing. Even though they may be excellent and win prestgious awards, the story line or telling is just too painful to watch more than once. I get the message and have no need to see it again.

I think Brothers, starring Tobey Maguire, Jake Gyllenhaal and Natalie Portman, might just fall in the second category. Marine Captain Sam Cahill (Maguire) loving husband and father, is shot down over Afghanistan and presumed dead.  His family is devastated and black-sheep brother Tommy (Gyllenhaal) steps up to help grieving wife, Grace (Portman), and Sam’s two little girls get through the hard times.  Cut to the war zone. Sam is not dead after all but a prisoner.  He experiences horrible atrocities and only after several months of this and the death of all his men, he is rescued.  He returns to his wife and children a different person. He can’t adjust to “normal” life and sees Tommy being the person he used to be and will never be again.

This movie was billed as a story about “(Sam) learns that his brother has gotten dangerously close to … Grace, and his kids.”   And while that is in there,  this is really a story about war and how it destroys a person. That the casualties of war aren’t always dead.  That coming home alive isn’t easy for the career warrior.  Since stories about the current war are box office poison, if this movie was billed as what it is, no one would rent it.

But should you decide to – these three actors were excellent in their roles. The two little girls were precious and Sam Shepherd and Mare Winningham did a great supporting job as the brothers’ parents.

Down the Up Escalator »»