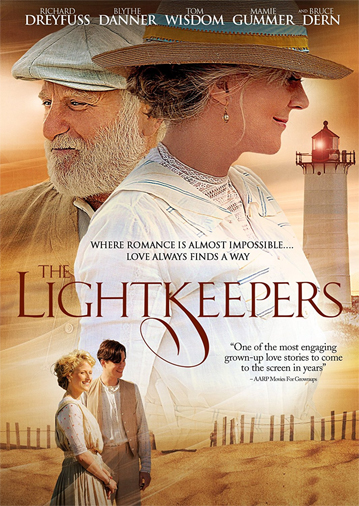 I rented The Lightkeepers from NetFlix for three reasons, the first two being Richard Dreyfuss and Blythe Danner.  RD has been a favorite actor of mine since Ed and I saw Goodbye Girl on our first date. (I reviewed Mr. Holland’s Opus on November 15.) I haven’t seen Blythe Danner in many movies, much of her work has been on the stage, but she’s Gwen Paltrow’s mother and I just like the idea of Blythe Danner.  The third reason I chose this movie is that it was one of the recommended ‘Movies for Grownups’ for 2010.

The Lightkeepers was shot on Cape Cod  and was one of those independent movies that spent very little time in the theater and went very quickly to DVD.  It’s a sweet story about Seth, (Dreyfuss) a lighthouse keeper, self-avowed woman hater, who suddenly has to deal with two women who come to spend the summer on the Cape.  The older woman (Danner) turns out to be someone from Seth’s past and he’s forced to face the truth that he’s not as much a woman hater as he pretends to be. There’s a sub-plot about the romance between Seth’s assistant (Tom Wisdom) and the younger of the two women (Mamie Gummer).

After I view a movie I usually watch the extra features on the DVD. I find stories of how the movie was made interesting. In Mr. Dreyfuss’ interview, he said this movie illustrated what America used to be and anyone who watched it should be scared to death to realize the path our nation is on.

I thought it was about love. And maybe loyalty to duty – keep the light lit. I wondered if I had watched the wrong movie – if maybe I should watch it again.  Instead I googled Richard Dreyfuss to see if I could understand where he was coming from.  It seems that in recent years he has been outspoken on ‘what he considers potential erosion of individual rights.’ (Wikipedia)

I won’t speak to that issue because — well, look at the title of this blog: My point of view and limited at that. I will say I didn’t get the connection between the political issue of individual rights and this pleasantly enjoyable movie — but I could have missed some symbolism.  Whatever. Richard Dreyfuss is still a great actor and I’m glad he finds rewards in his work.