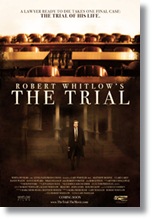 This novel was loaned to me by my sister, who probably picked it up in a flea market or used book store.  Written by Robert Whitlow and published in 2001 by Word Books, the genre is Christian Mystery.

A young man, Pete Thompson, is accused of murder but has no recollection of anything that happened the night of the crime.  The parents of the murdered girl are wealthy enough to hire a special prosecutor to insure a conviction, though most of the evidence is circumstantial.  “Mac” McLain, a local lawyer, is appointed by the court to defend the young man. His work is cut out for him since Pete can not assist in his defense.  His time in jail becomes a journey of faith for Pete.

A prayer group from the Presbyterian Church commits to pray for everyone involved in the trial and that the truth about what happened would be revealed.  The defense attorney, Mac, has no faith that such activity will help. His belief seems to be that once God finished creating the earth He got rather bored with it and now takes no hand in what happens here.  Mac has plenty of baggage of his own that needs healing but he puts that aside as he tries to do the best for his client in this court room drama.

Whitlow does a good job of keeping us guessing about the real murderer, using red herrings to lead us off in other directions. I was completely surprised, figuring it out only a couple of sentences before the denouement.

In 2010, The Trial was made into a movie starring Matthew Modine and Robert Forster.  I plan to watch it later.  I’m interested in how Hollywood handled the Christian theme that ran through the story. I notice on Amazon that there is a “movie version” of the book and wonder if it’s a re-write of the original.

Robert Whitlow’s latest book, The Water’s Edge, will come out in August. Check out his website www.robertwhitlow.com to see all his titles.

Technology – A Gift and a Curse »»