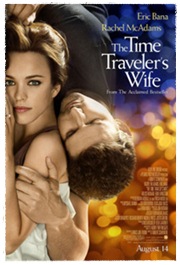 I don’t really ‘do’ the para-normal genre, but I thought that on the weekend when we all did a bit of time travelling (and gained an hour) the review of this movie would be appropriate.

Since this film was released in 2009 I have heard many mixed reviews ranging from ‘a beautiful love story’ (a fellow writer), to ‘I can’t believe I wasted a date night on this,’ (a co-worker mom of three).  I just had to put it in my Netflix queue and spend a Sunday night watching it to see for myself.

The title of course tells you a lot. Henry, played by Eric Bana, is a Chicago librarian who has a gene that causes him to travel back or forward in time. He can’t control his exits and entrances, but seems to have a little aura before he takes off.  (He also must have a job that allows him to drop out of sight for unknown periods of time.  We might suggest a large electronics store where the employees do the same sort of disappearing act.)

One day in the library Henry meets Clare, played by Rachel McAdams (from The Notebook).  She knows him already because she met him when she was a child and he an old man. But he doesn’t remember meeting her because he hasn’t done it yet.  Are you keeping up with this?

She knows about his life and loves him anyway. They marry and she tries to adjust to his unusual comings and goings.  His travels are rather dangerous because, having no control, he may land in a public place totally nude.  Clothes don’t travel through time — a false premise we have been led to believe from watching the Back to the Future series.

Okay, it’s not a bad movie if you are good at suspending disbelief.  This screenplay was taken from the 2004 best seller written by Audrey Niffenegger.   She is a visual artist and writer who lives in Chicago. Find out more about her work at audreyniffenegger.com.

An Uncommon Crusade by Caron Guillo »»