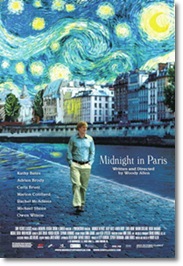 When a movie is nominated for an award, it’s rarely a film I have seen. Most of my movie viewing is done on basic cable or through Netflix.  Which means, the movies must be at least old enough to be released on dvd.   But this week, only days after it won Golden Globe Award, I saw Midnight in Paris.

This movie stars Owen Wilson and Rachel McAdams, two of my favorites, and features Kathy Bates, another favorite, in a smaller role.  Wilson was nominated Best Actor, and Woody Allen scored two nominations, for directing and for writing the screenplay.  The musical score is beautiful, good enough for an award nomination, except awards are given only for original scores.  This sound track contains a lot of Cole Porter and other songs from the early Twentieth Century.

Midnight in Paris is different from most Woody Allen movies in that, while it is quirky, as his films usually are, it is rated (only) PG-13 — for sexual innuendos and smoking.   No F-bombs or nudity in this cinema.

On a visit to Paris with his fiance’s family, Gil Fender (Owen Wilson) falls in love with the city. He has become an aspiring novelist after achieving success as a Hollywood screenwriter and he senses Paris is the perfect place to write. While walking the streets one midnight, he steps back into the Paris of the Roaring Twenties.  Great writers and painters together, partying, drinking and living their Bohemian lives. Meeting and talking to the literary geniuses of this era changes Gil’s writing and his life.  Who wouldn’t want to flesh out their ideas with Ernest Hemingway, or have Gertrude Stein critique their work? In the end Gil comes to realize that today’s reality can be as exciting and rewarding as the past. It’s up to us to make it that way.

Because Woody Allen is Woody Allen, some of the 1920-era characters are humorously over the top, written rather tongue in cheek. Hemingway talks like he wrote, all about heroism, bravery, war, and deep, true feelings (for women in particular).  The slightly mad personalities of Picasso and Dali are fodder for Allen’s pen.

Woody Allen won the Golden Globe Award for writing the screenplay.  The Golden Globes are given by the Hollywood Foreign Press Association.

This is really a delightful movie that I recommend.

«« Judging your ruler by my yardstick

…With a Little Help From My Friends »»