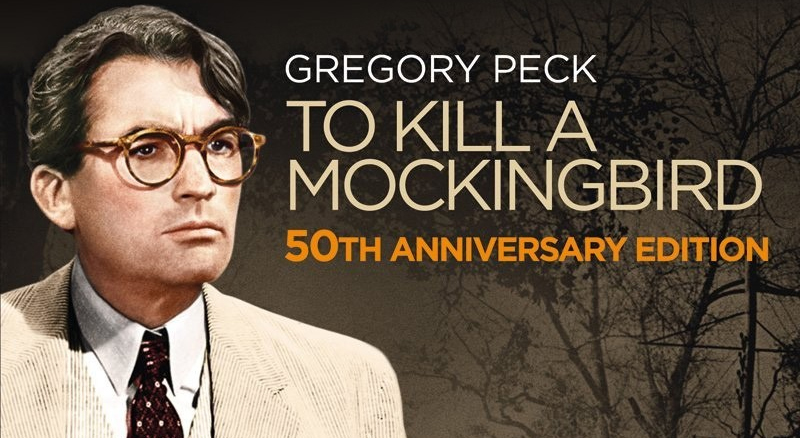 Last night I watched the American Film Institute’s 50th Anniversary presentation of To Kill a Mockingbird. This was shown on the USA Network with only four well-place commercial breaks.

This is my favorite movie, and possibly the best movie ever made.  An AFI survey a few years ago listed Citizen Kane as the number one film of all time, but I can’t stand Citizen Kane, so I just might be biased.

Earlier last week I also watched (on Netflix) the documentary, Hey Boo: Harper Lee and To Kill a Mockingbird, made in 2010 for the 50th anniversary of the novel.

The book and the movie can almost be reviewed as one, they are that close in plot and dialogue. Harper Lee was a consultant on the movie and much of the original writing from the novel made it into the screenplay.  This happens so seldom it is worth mentioning.

I fell in love with the book 52 years ago when I bought it from the Book of the Month club. Not only did I love the book, everyone did. It later won a Pulitzer Prize.

Today, watching the movie, most agree that no one but Gregory Peck could have played Atticus Finch.  That’s certainly my point of view. However, in casting the part both Spencer Tracy (well maybe) and Rock Hudson (shudder) were considered.  The casting director combed the South for the perfect Scout and Jem, locating newcomers Mary Badham and Philip Alford.

Mary Badham received an Oscar nomination for best supporting actress for her portrayal of Scout (She lost to Patty Duke in The Miracle Worker). She never appeared in another major film production, though she has made a decent living with television work. Philip Alford later won a role as one of James Stewart’s sons in Shenandoah, but since then has had small roles in big movies or vice versa.

Some said To Kill a Mockingbird, both book and movie, rode the wave of the Civil Rights movement to achieve the success it did. Actually, the book seems not so much about race relations as it is about human kindness and respect for others. Atticus gathers Scout in his arms and talks to her about ‘climbing into the other person’s skin and walking around.’ Thus to find understanding and empathy for the new trying-too-hard teacher, the poor kid in class with no lunch money, Boo Radley and Tom Robinson.

The book is now required reading in most junior high and high schools, often initiating discussions about the characters and their motivations.

For whatever reason, Harper Lee never published another novel. I’m sure she was encouraged (hounded?) to write a sequel. That’s a compliment; it means your characters are strong and likable. But how could she craft a story that compared in any way to the one she had already told?

She reportedly started another novel and got bogged down in the research. She told a close friend she had ‘nowhere to go but down.’   She tired of the limelight and declined to give any more interviews.  Even Oprah could not lure Nelle Harper Lee to sit on the couch with her.

To Kill a Mockingbird. Read it or watch it. With my recommendation.

«« Not the Sharpest Tool