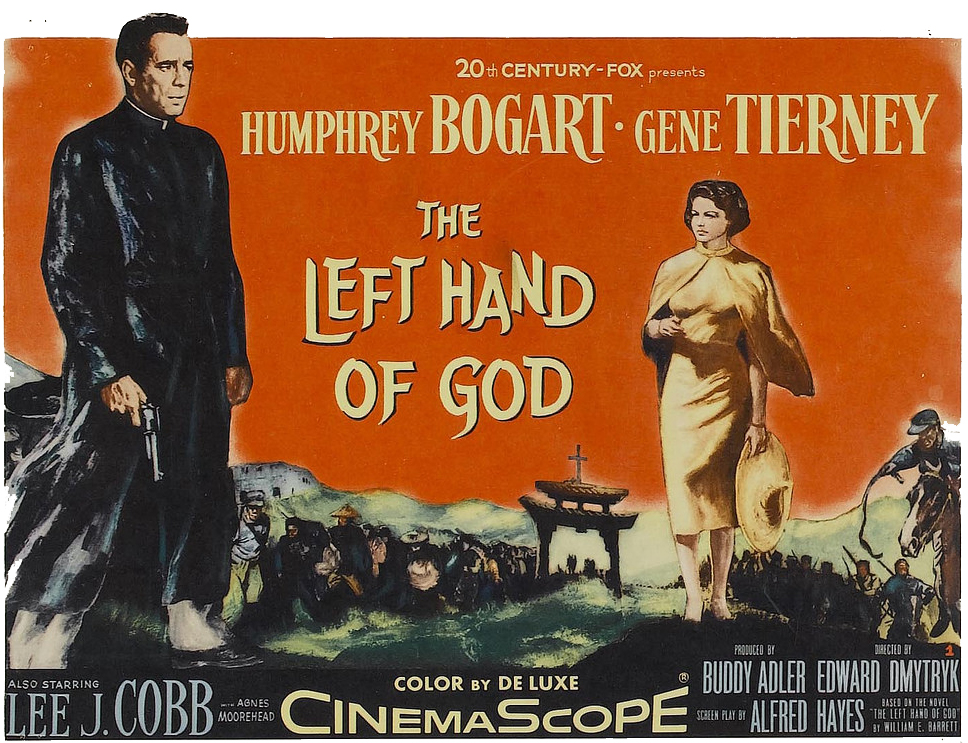 One night, during the Christmas break, I was pleased to see the listing of a favorite old movie, The Left Hand of God from 1955. This story features Humphrey Bogart and Gene Tierney, though this is not one of the most mentioned films during discussions of these actors’ resumes.

A man in priestly robes (Bogart) appears at a small Catholic mission in China.  He is presumed to be the long awaited Father O’Shea. Although his demeanor and behavior are different from what one would expect of a priest, his rough tactics prove successful with the local bullies.  (It’s 1947 and China is dissolving into civil war and revolution.)  To further complicate matters, the mission nurse Anne (Gene Tierney) seems attracted to him and he to her.

When he can struggle with this no more, the man confesses his name is Jim Carmody, recently escaped from the camp of a Chinese warlord (played by Lee J. Cobb).  Carmody’s confrontation with (and victory over) the warlord leave the villagers believing he is a saint and this was a miracle.  The Bishop, though not happy at the deception, is more concerned with the disillusionment of the Chinese converts if Carmody is found out. So, ‘Father Shea’ leaves quietly after telling Anne of his true feelings for her … leaving us to wonder if they will ever see each other again.

The novel, The Left Hand of God, was written by William E. Barrett. He wrote several books that dealt with men who were forced to look at their attitudes about faith and God.  Humphrey Bogart was a good choice to play Jim Carmody, since Bogart usually portrayed a hard boiled cynic who in the end shows his noble side.  Reviewers call The Left Hand of God an adventure story with a religious theme; the story of one man’s faith journey.

You may find the book in your local library or chance upon it in a used book sale. Watch for the movie on cable or, while I’m not sure it’s out on DVD yet, it might appear one day in the sale bins of the big box stores.

I recommend both movie and book.