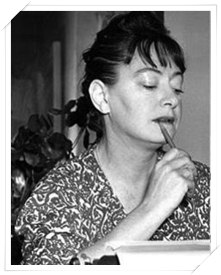 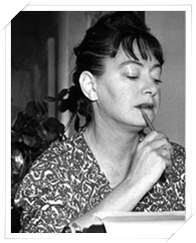 A few weeks ago when I was reviewing the books I had read in 2012, I mentioned Dorothy Parker, a writer from the early 20th Century.  “She was a poet, short story writer, critic and satirist, best known for her wit and wisecracks … ” (Wikipedia).  In that earlier post I had meant to mention her most quoted poem: Men seldom make passes at girls who wear glasses.

I first heard those lines 50-60 years ago and only recently learned that there was someone to attribute them to.  I assumed they were in the large body of work credited to “Anonymous” or “Unknown.”

Marilyn Monroe almost quoted this poem in the 1953 movie Gentlemen Prefer Blondes. What MM said was, “Men aren’t attentive to girls who wear glasses.”  I don’t know why the words were changed. It might have been in the character of the dumb blonde Ms. Monroe was playing, or the writers couldn’t get permission to use it, or “make passes” was one of the questionable phrases the Legion of Decency was censoring that year.

But back to Dorothy Parker.  In her time she wrote for The New Yorker, Vanity Fair and Vogue.  Her short stories were gripping and her book reviews ruthless. Her poetry often dark with a hint of suicidal thoughts. Her double entendres were usually obscene.  During her few years as a screenwriter she received two Academy Award nominations.

Here are some tidbits from her work:

“If you want to know what God thinks of money, just look at the people he gave it to.”
“This is not a novel to be tossed aside lightly. It should be thrown with great force.”
“Miss Hepburn runs the gamut of emotions from A to B.” (A review of a Katherine Hepburn play.)
“Don’t look at me in that tone of voice.”
“I hate writing. I love having written.”

The Dorothy Parker Society has established a website with virtual tour of Dorothy’s home and favorite haunts in New York City. That can be found at www.dorothyparker.com.  You can find “all poems by Dorothy Parker” (that’s what they said) at www.poemhunter.com.

She was truly one of the most interesting characters of the Roaring Twenties era. She died in 1967 at the age of 74.