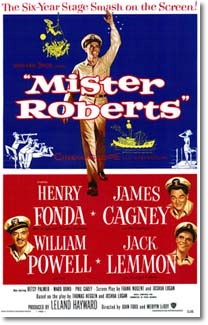 Sunday afternoon is my usual day to post but today there is stiff competition for my time and attention.

On February 1, Turner Classic Movies began their 31 Days of Oscar Celebration. It’s rather self explanatory: for 31 days they will show films that are Oscar winners or nominees. Since this is year number 84 for the Academy Awards, there are many films to choose from.  A lot of awards are given, both technical and directorial as well as acting.

This afternoon’s offering was Mr. Roberts, a favorite from 1955 starring Henry Fonda, James Cagney, William Powell and a young Jack Lemmon.  This was originally a novel by Thomas Heggen adapted into a Broadway play by Heggen and Joshua Logan before it became a movie. It’s the story of Lieutenant (J.G.) Doug Roberts (Fonda), stuck on a cargo ship during World War II with a Captain (Cagney) who is a tyrant.   Mr. Roberts wants to get into the war, serve on a destroyer, but the Captain will never approve a transfer. This movie is funny, touching and a little sad.  The supporting cast of sailors includes Ward Bond and a crew that could be identified as “young actors who will later be big in television.” Though I consider Mr. Roberts an outstanding movie it did not receive an Oscar nomination. Jack Lemmon won the Academy Award for Best Supporting Actor and that’s how the movie qualified for the 31 Days Celebration

On tap for the rest of the day today is Auntie Mame, starring Rosalind Russell, The Music Man, with Robert Preston and Shirley Jones (and five-year-old Ron Howard), and My Fair Lady, featuring Rex Harrison and Audrey Hepburn.

For good movie viewing without commercials, Turner Classic Movies is the place.  They really are usually classics.  To see the line up for 31 Days of Oscar, visit 31Days.tcm.com

«« My Love/Hate Relationship with Television