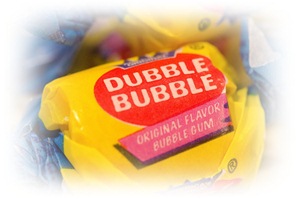 While enjoying TCM’s 31 Days of Oscar (see previous post) I caught the 1933 version of Louisa Mae Alcott’s Little Women, starring Katherine Hepburn as Jo March.  Ms. Hepburn, one of my favorite actors, was young in 1933 and really chewed the scenery trying to pull off the character of the tom boy sister in this rendition of the 1868 novel.  But more about that some other time.  What caught my attention as I watched was that she was also chewing gum. “Is this out of character?” I asked myself. “Had chewing gum even been invented during the Civil War?”

Not knowing the answers to my questions, I went to tried and true Google.com.  It seems chewing gum has existed for over 5,000 years. Five-thousand-year-old gum, with tooth imprints, has been found in archeological digs in Finland.  The chaw was made out of bark tar and thought to have medicinal advantages.

How did pre-historic man find out it had medicinal advantages? I can’t imagine. Perhaps some caveman thought to himself, “I’m really feeling lousy. I think I’ll chew some bark tar . . . ahh, that’s better.”  But I digress. Back to chewing gum.

We were all told at one time or another that we shouldn’t swallow our gum, lest it stay in our stomach for 7 years. Not true. That is an old wives tale used by mothers for centuries to scare their kids. Gum will travel out of the body just like any other food. However, gum base cannot be digested, so the trip may take a little longer. But not 7 years.

Fleer invented the first bubble gum. It was pink because that was the only food coloring they had on hand at the time.  But this gum was not a success because it was too sticky.  In 1928, a Fleer’s employee discovered a sticky-free bubble gum by accident, as happens with many inventions. The company named it Dubble Bubble and it stuck around for several years. (excuse the pun.)  In 1951 TOPPS added baseball cards to their gum packages, giving Dubble Bubble significant competition.

Chewing gum has brought humanity a  lot of enjoyment with other side benefits.  On an airplane, the chewing can keep your ears from popping. Gum decreases the tears while you are cutting onions. After a meal, gum helps prevent heartburn. It has long been used as a breath-freshener. One of the first gums marketed with this in mind was Adam’s Clove Gum with the slogan, “It takes your breath away.”

Chewing gum has its critics also. Almost unanimously the criticism is that chewers do not dispose of the product appropriately.

Many teachers do not allow gum in the classroom. Chewing gum, the product and the act, is illegal in Singapore. Since 2004 gum of therapeutic value is allowed. Gum can be bought only with a doctor’s prescription. The Soviet Union had a ban on gum for many years, lifted in 1976.

With satisfaction, I clicked on the red X and left the site, knowing more than I ever needed to know about chewing gum.

Thank you, Mr. Google, wherever you are. There’s no limit to your knowledge.

My Love/Hate Relationship with Television »»