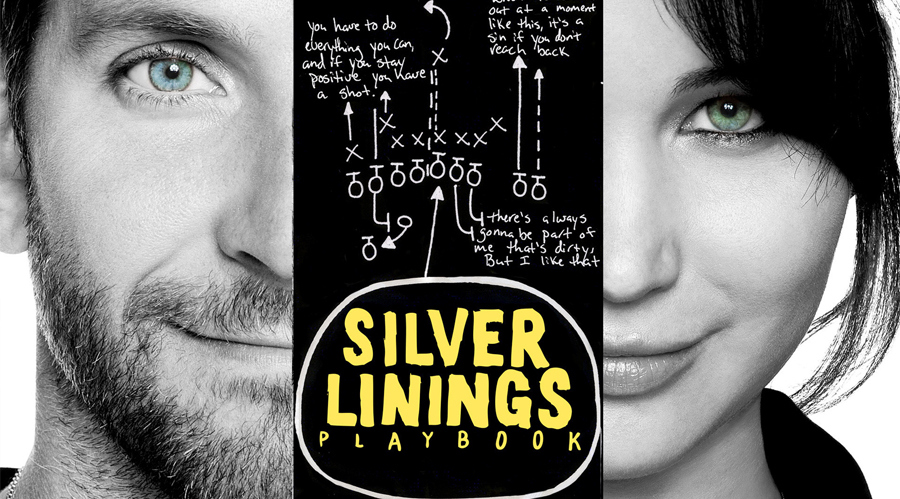 When I review a movie, you can be sure of one thing: it is not currently running in theaters. I have mentioned before my fondness for Netflix and how well it works for my lifestyle. I very seldom see first-run movies in a theater. The most recent was Les Miserables last Christmas. The time before that was Blind Side several years ago. But I digress.

I was interested in seeing Silver Linings Playbook after it was nominated for so many awards last spring. In it, former teacher Pat Solitano (Bradley Cooper) moves in with his parents after a stint in a mental institution. He is “undiagnosed bi-polar disorder” and resists taking any meds. His parents’ home may not be the best place for him because his dad (excellently portrayed by Robert De Niro) makes book on the football games and is in denial about his own obsessive/ compulsive disorder. Pat’s mother is an enabler. Pat is determined to reconcile with his ex-wife Nikki who left him when he discovered she was having an affair; he attacked her lover and nearly killed him. Nikki has no interest in making up; in fact she has a restraining order against him. Things get even more complicated when Pat meets Tiffany (Jennifer Lawrence), a girl with some baggage of her own.

Bradley Cooper does a great job depicting the character with bi-polar disorder — mood swings, hair trigger temper, abject apologies. Actually, he’s so good it’s hard to watch. That and the offensive language caused me to pause and seriously think about whether to finish the story.  But seeing Pat work through learning about himself and what he must be to survive in the world, made the viewing worthwhile.

The screenplay was written by David O. Russell from a novel by Matthew Quick. I am thinking to buy Mr. Russell a thesaurus, since he used very few verbs, adjectives or adverbs that did not start with the letter “F”. This is a sign that the writer has a limited vocabulary or else all of his characters do.

An aside: IMDb (International Movie Database) has a Parents Guide link that will tell you why the movie received a certain rating and what amount of sex/ violence/ profanity you can expect to see. This is helpful in choosing movies for grownups too. In Playbook, the f-word was used 30 times.  And sadly, in my opinion, none of them were necessary to the plot.  The actors did such a good job of showing anger, frustration, etc. we didn’t need the words.

This movie was nominated for an Oscar for Best Picture and several cast members also received nominations for their roles. Only Jennifer Lawrence won that evening —  Best Performance by an Actress in a Leading Role. She also captured a Golden Globe and Screen Actor Guild Award.

Do I recommend this movie? Over all, yes, but be warned about the language.

Lost – An Essay from the Archives »»