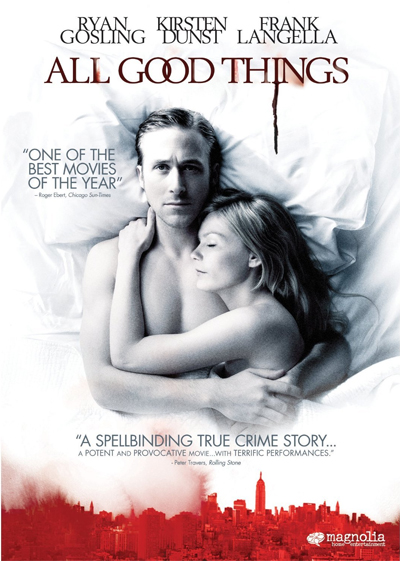 It’s hard to believe that sweet Ryan Gosling (who grew up to be James Garner in The Notebook) could be devious and mean. Actually, after that movie proved to be a breakout role for this very talented actor, he has played some very edgy characters.

All Good Things came out in 2010 but I only recently put it in my Netflix queue after it was recommended as a Movie for Grownups. MFG are movies with serious plots and excellent acting but have very few four letter words to assault the ears or sex scenes that makes one feel like a voyeur.

David Marks (Gosling) and Katie (Kirsten Dunst) meet, fall in love, marry and move to Vermont to run a health food store. But David is pressured by his father (Frank Langella) to go into the family business. The Family Business is ostensibly real estate, with a side interest in buying politicians.

The script is taken from news stories about a high profile unsolved murder in New York, the Robert Durst case. Newly discovered facts, court records and of course speculation is used to tell the story of the young wife who disappeared and whose body has never been found, the strange behavior of the young husband, and the prosecutors who could find no probable cause to bring charges until 18 years later when the cold case was reopened.

I am interested in creative non-fiction and cold case investigations, so this was a movie that held my interest to the very end.

You can read more about this case here.

Musings from my nest »»