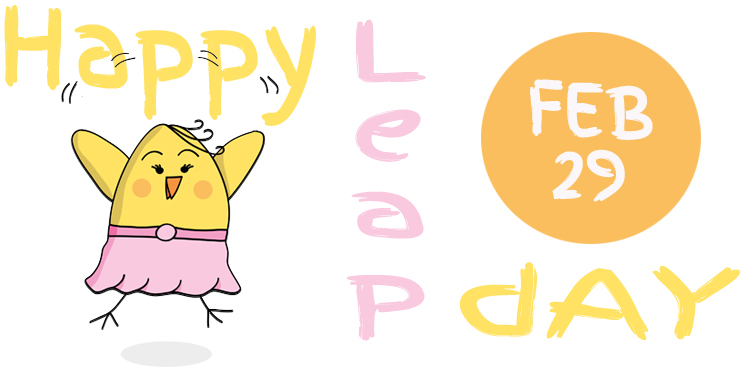 Tomorrow is February 29, a day that comes around only every four years. I say, this is a special day, right? That should be reason to celebrate.

My friends Rhonda and Gary were married on February 29. I can’t remember if this is their 8th or 9th celebration. They say they chose Leap Day because it would be an easy date for Gary to remember. However, I’m thinking, since at one time there was a tradition that it was permissible during Leap Year for the woman to propose . . . maybe . . . no . . . a woman asking a guy to marry her is pretty much permissible at any time now, so never mind. In Greece it’s considered unlucky to marry on Leap Day. But it seems to be working out well for Gary and Rhonda.

I don’t know anyone who was born on February 29, but it happens. In fiction, Gilbert and Sullivan, in their comic opera Pirates of Penzance, used the novelty of a leapling (Leap Year baby) as a plot twist. Frederic, our hero, was apprenticed to a band of pirates until his 21st birthday. However, since he was born on February 29 that date wouldn’t arrive until he was 84 years old.

(BTW, there is a delightful movie of Pirates, made in 1983 with Angela Lansbury, Linda Ronstadt [who knew she could sing opera?], and a very young Kevin Kline.)

A memorable Leap Year occurrence: On February 29, 1940, Hattie McDaniel was the first African American actor to win an Academy Award (Oscar) for her role in Gone With The Wind.

But back to celebrations. Perhaps I should throw a party. Serve food I can bear to eat only once every four years (if that often). Sushi, eel, anchovies, escargot, turnip greens, oysters, kale.  Some of that stuff I have never eaten. Can you guess the rest of the story?

In Anthony, Texas, population 5,000, there is a quadrennial birthday party for Leap Year Babies. It began in 1988, rather a whim of a council woman who felt the need to have her birth date recognized when it came around. The idea grew and grew and now there are 300 members of the Anthony Birthday Club of Leaplings, some living as far away as Europe. As many as can come every four years to celebrate with a town parade and festival.

So there’s our celebration! Of course, Anthony, is 950 miles from Arkansas. It sits in the shadow of El Paso, at the tip of Texas that juts out into New Mexico. Maybe not this year, but think about 2020. Who here doesn’t love a parade and town festival?

Never Leave Home Without One »»