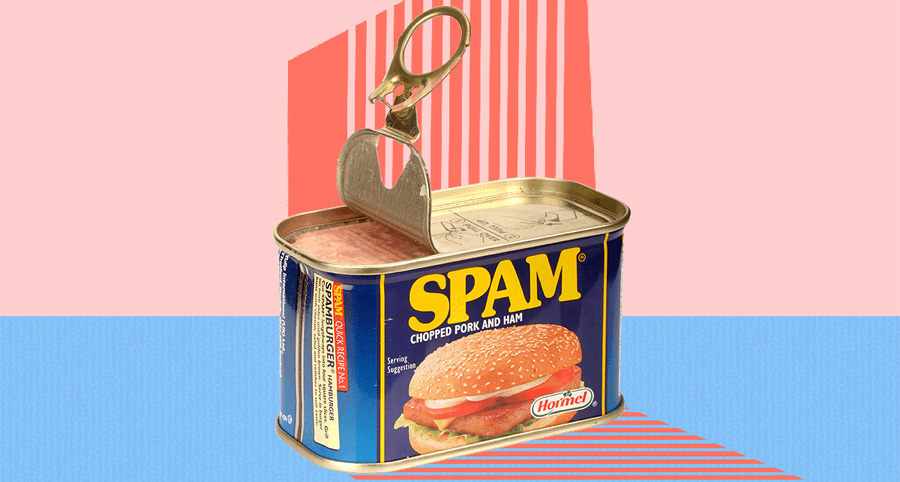 One day last week, a can of Spam appeared on my front steps.

Was it just another of the items occasionally found in my yard — soda cans, candy wrappers, vodka bottles? I do, after all, live on a corner lot, seen by many as an approved depository for anything they no longer want in their car.

I really don’t know, but made curious by the unusual gift, I decided to find out more about this product, which was developed by the Hormel company in 1937, but became more widely used during WWII when fresh meat was rationed.

This mystery mix was similar to the ‘pork luncheon meat’ included in K-Rations for paratroopers. Comedians had a field day joking about how well we were feeding our military.

Spam (euphemistically short for ‘spiced ham’) contains only six ingredients: pork with ham, salt, water, potato starch, sugar, and sodium nitrite (a preservative not to be confused with sodium nitrAte, which is something else entirely). The listing ‘pork with ham’ adheres to an FDA ruling that labels must list the most first. Thus, other parts of the pig with a little bit of ham added is the base ingredient of Spam.

During my valuable research I came across SPAM.com where I found several recipes: Spam fries, Spamburger, Fried Nice, Cheesy Mac with Spam chunks, and Musubi.  Musubi is a Hawaiian dish made of rice and Spam molded in a press and wrapped in nori (which is seaweed).  Talk about a pig in a blanket . . .

Now, I’m still not too sure what to do with the bounty that came to me through someone’s goodness, carelessness, or amusement.

Perhaps give it a place of honor to remember my childhood in the Forties, when fried Spam might be part of the daily fare, with okra and tomatoes from the Victory Garden.

«« How I Spent My Summer Vacation